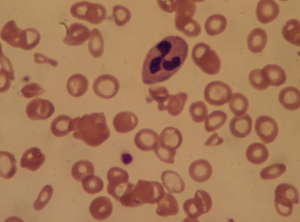 Anaemia is a condition where theÂ amount of haemoglobin in the blood is below the normal level, or there are fewer red blood cells than normal.

There are several different types of anaemia and each one has a different cause, although iron deficiency anaemia is the most common type.Â Other forms of anaemia can be caused by a lack of vitamin B12 or folate in the body.

The main symptoms of iron deficiency anaemiaÂ are tiredness and lethargy (lack of energy). Other symptomsÂ include:

Speak to your GP if you notice any of these symptoms. They will be able to diagnose iron deficiency anaemiaÂ with a simple blood test.

However, in most cases there won’t be any symptoms at all,Â particularly if the cause is a slow loss of blood.

Iron deficiency anaemia occurs when there isn’t enough iron in the body. Iron is found in meat, dried fruit and some vegetables. Iron is used by the body to make haemoglobin, which helps store and carry oxygen in red blood cells.

This means if there is a lack of iron in the blood, organs and tissues will not get as much oxygen as they usually do.

There are many conditions that can lead to a lack of iron. In men, and post-menopausal women the most common cause is bleeding in the stomach and intestines. This can be caused by:

In womenÂ of reproductive age, the most common causes of iron deficiency anaemia are:

You will need to be monitored every few months to check the treatment is working and your iron levels have returned to normal.

The underlying cause will also need to be treated so anaemia does not come back.

Some foods and medicines can make it harder for your body to absorb iron. These may include:

This entry was posted in Women's Health. Bookmark the permalink.